I discovered today that I am unable to correctly say the word orchard. Apparently, I think it’s more fun to say orchid instead. English major say what?!?

Moving right on into the topic of orchards, the family and I ventured to Terhune Orchards for some apple picking. If that’s not the epitome of fall, I don’t know what is!

Terhune Orchards is a family owned farm located in Princeton which is 10 minutes from Rider. It’s quite lovely and you can definitely feel the emphasis on “family”. Pumpkin picking, apple picking, live music, fresh products of all kinds, petting zoo, etc. etc. etc. There’s a very authentic vibe to the place and I personally was put into a great mood just from the atmosphere.

Before I left I had a 4.5 mile run and some breakfast.

Fueled up! Let’s get some apples!

We ended up at the wrong farm and had to drive to the other location which is where the actual apple orchards are. Whoops! It’s OK though, it was only a 2 minute drive to the other one and I got a few good pictures before we left. 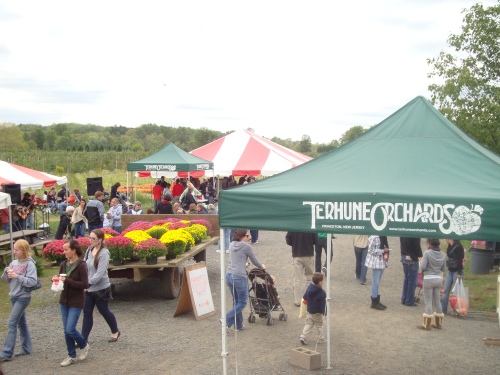 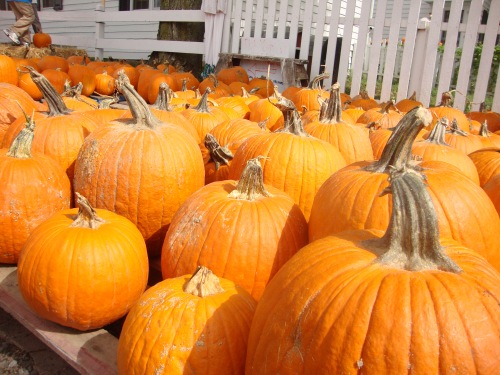 Pumpkins in a wheelbarrow = adorableness to the 16th power.

And check out what the store had.

Cranberry honey! Holy bisky, I didn’t know such a thing existed and can only imagine how amazing it probably tastes. No purchases here but I thought it was a fun little Rider reference (We bleed Cranberry now and forevaaahhhhh)

Like I said before, 2 minute drive and now we were ready to pick some apples! I took a bunch of pictures so everyone could view awesomeness.

Look at them walking in a line! Hahaha. LaForge representin’! 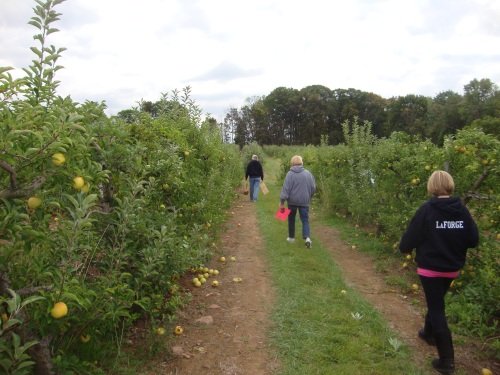 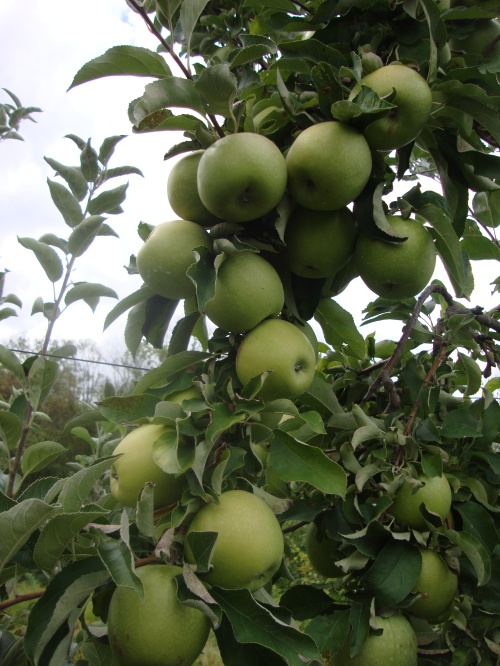 Tiny apples may be one of the cutest things to exist on this planet. 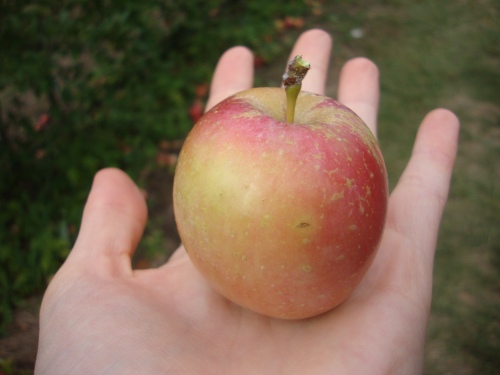 Unsure of what these were, my mom and I both took a bite from one. It was sour. Really sour. And the thing is, I STILL haven’t a clue what they are. They photograph nicely though...they look kind of like baby pomegranates! 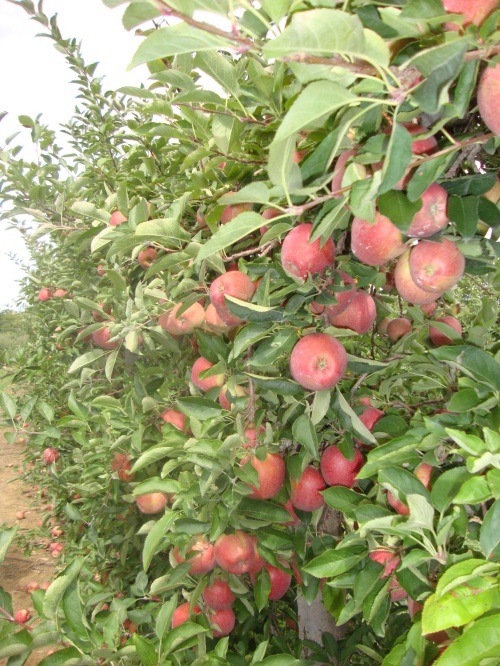 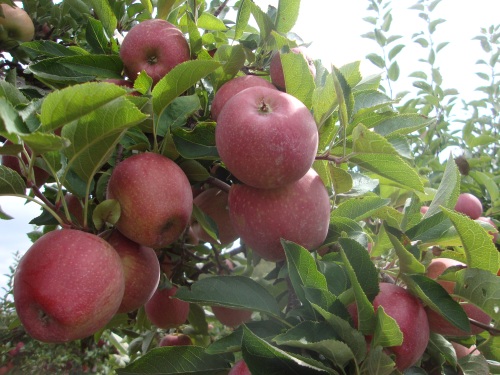 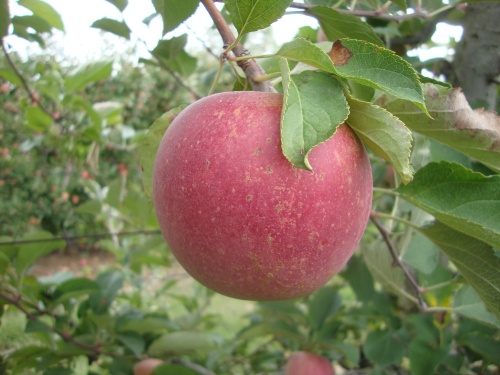 I desperately wanted to climb a tree while we were there but orchards have really changed since I was younger. The trees are all tiny and supported by wooden beams. Effective? Yes. Fun? Not really. Chubby and I had to improvise… he made me poses for this. 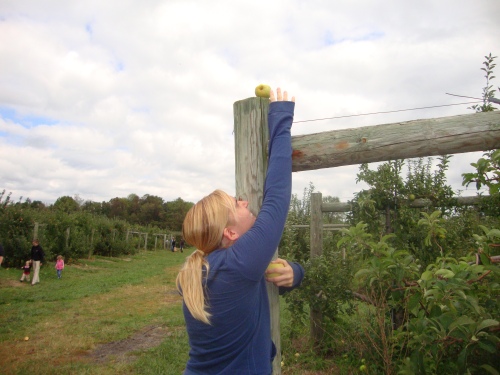 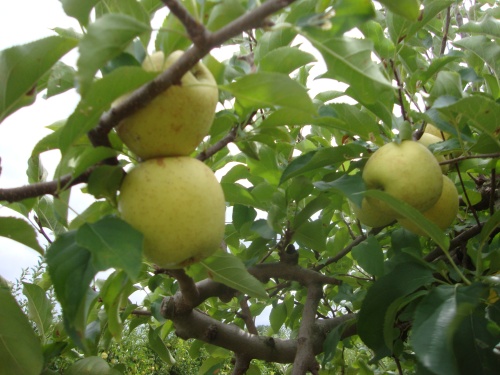 A hour later we had a bag filled with a plethora of fruity goodness. Next up was a quick trip to the gourd patch.

I apologize for that one. 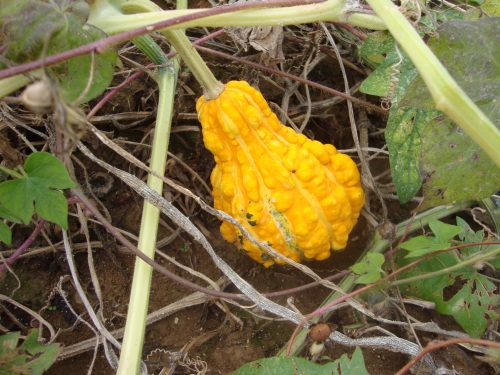 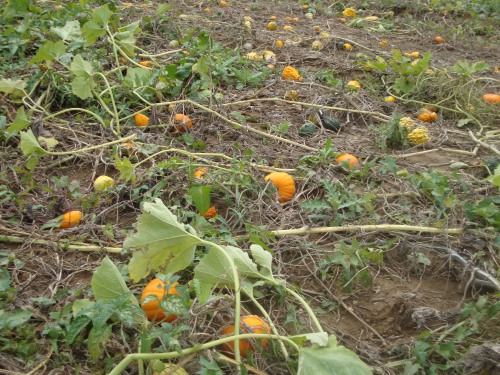 It looks like a swan! Quite pretty (and kind of creepy at the same time….it’s like when people see Jesus in their toast)

Sometimes I make Chubby be my hand model.

Pumpkin in a coat?

Creepin’ on the far away tractor.

Creepin’ on the up close tractor

My mom bought some sweet corn

And we took a few more pictures before they returned me back to my RU. 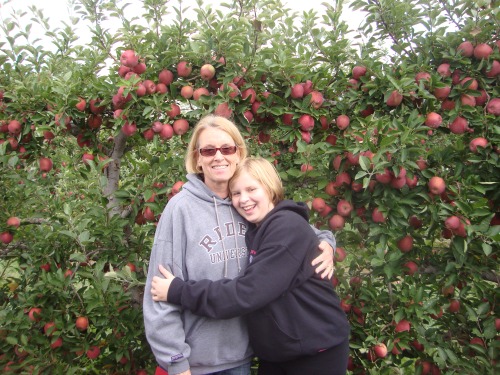 I look rather tall I must say. Either way though, I love my mom. Heehee.

At first they were just standing next to each other so I yelled at them, “Act like you like each other!!!” They can’t fool me, I know they do! 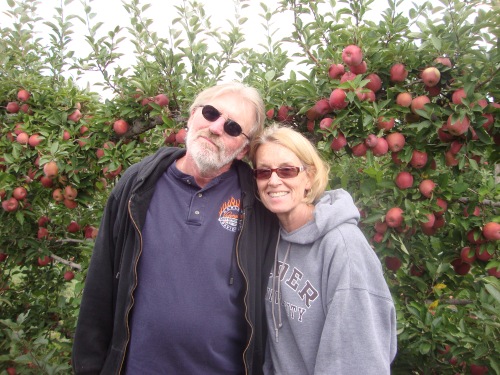 And of course this wouldn’t be a real Keribop blogpost unless there was a picture of myself. Come on though, an apple background? Can’t pass up an opportunity like that!

And that was it! I had a great time and loved getting to spend time with the family doing fun things like that. Family bonding is the bestttttt 😀

When I got back, I was feeling hungry despite the fact that I ate the equivalent of probably 3 apples. So, I made a SIAB.

I rounded it out with a cup of coffee despite it being the afternoon. Don’t judge me. Caffeine is my thing sometimes. 😉

And now it’s time to crack down on some homework. Booooooo! 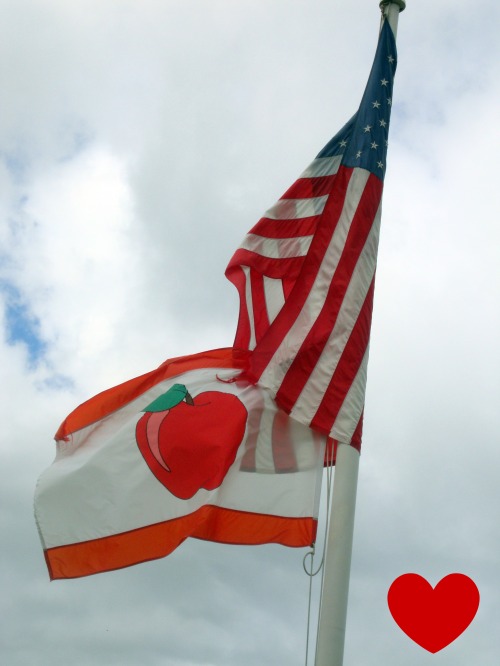 Peace, love and apples everyone!

I SHOULD be continuing to write my event for Mickey Hess’ class but I’m going to blog instead. And anyway

So I went home Friday for some Easter shenanigans with the LaForge/Merkle families. Good Friday means no meat so when in doubt, my parents order pizza! They asked for any requests and my sister Cate and I had one thing to say to that… VEGGIES! And LOTS of them!

Isn’t it glorious? This baby was topped with red peppers, green peppers, black olives, onions and mushrooms. I used to never be a fan of silician style pizza but this was incredible! (although some broccoli or spinach would have made it SUPER awesome) I think I made up for that though with the gigantic side salad I made for the family 🙂

Soon after, it was time to paint some eggys!

She was too excited to make a normal face….

Er, we get an A for effort for at least trying to be creative!

The next day was basically a fantastic day and I don’t even mean this because of the family party… you see, earlier in the week (about Wednesday I think) I had decided that Saturday would be the day of another big run. 6 miles had been conquered so I decided to take on 7!

Saturday morning I was up at 8 and at the park by 8:30. While I roamed around the house preparing myself, I chowed down on a chocolate peanut butter Kashi Go-Lean bar

Didn’t take a real picture of it… my bad!

When I began my run, I was nervous. 7 miles seemed like SO MUCH! I had ran 5 miles the previous day and was worried as to whether my calves were going to hold up OK. However, the worry didn’t stop me from going. I cranked up my music and RAN. The miles went by fairly quickly until I hit mile 4.5… my pace had gone down to about 9:45 so I went after my stash!

(There is a secret compartment in my Ipod armband that is meant to hold my headphones when I’m not using them. Turns out, it can also conveniently fit 10 jelly beans in it as well! Hence, my stash!)

I didn’t realize how difficult it was to eat and run at the same time; not as easy as I thought! Those beans did the job though… by mile 5.5 I was feeling good and knew that I had less than 2 miles to go. When I got to mile 6 my brain began screaming at me, “LET’S GO LAFORGE, ONE.MILE.LEFT!!!!” And then…. poof.

I was in such an amazing state of mind, not to mention still in total awe that I had done it, so I wasn’t feeling very hungry when I got back to my house. I showered first but it didn’t take too long for the hunger to kick in…OATMEAL was what I was craving.

Oh yes please! I whipped up a fabulous combination of oats made with milk (it really does taste better!), a ton of strawberries, wheat germ, walnuts, some granola and a good helping of almond butter. It was a delicious way to refuel after such a success!!!!!

I went shopping with Cate a little later (bought a dress and a pair of shorts, FINALLY!) and later, later we headed to Mamere’s for the yearly Easter pie! What is Easter pie, you ask? It’s this…

THIS is the combination of sausage, eggs, ricotta and mozzarella all baked into homemade bread…. basically, it’s a heart attack gift from God. Some people don’t like the flavor combination but my family? We DEVOURED it. 16 of us ate almost the entire thing, the size of which was much larger than my head. Don’t worry though, I made sure to fill my belly with spinach salad before my attack 🙂

And what family party wasn’t complete without my mom’s mountain of Rice Krispy treats?

The rest of the night was a lot of family chatter, absolutely hilarious stuff to say the least. Drank some wine, ate some good food, laughed a million laughs and am STILL wondering why my uncle called a blackberry a nut. Hahahahahaha.

Today was an early morning (do I have anything else otherwise?!) I was up at 7 to make PANCAKES! This is slowly becoming a holiday tradition I’m noticing……not that there’s anything wrong that!

I made Serena her usual good ole’ fashioned ones with chocolate and then added a packet of instant oat meal to the 1/2 cup of batter that I had left for myself. What I yielded was three of these guys…

It looks like a cross between a potato pancake and a hamburger patty! (I did also add purple food coloring to them)

Om nom nom… have you noticed the strawberry trend? My mom bought a GIANT container of them and I tried to eat my way through as much as possible in two days. Next time, maybe I’ll cut up the strawberries and add them to the batter as well? I loved the consistency of the oatmeal with the pancakes but they were just too plain for my taste. Nevertheless, it was still a nice and filling breakfast!

The rest of the day included church, finally dying my blasted dark roots, redying my hair, playing outside, packing and another family party! It was essentially an ideal way to spend the holiday and it makes me love my family even more ❤

Well…. I think I covered damn near everything that happened this weekend and now, it’s time to commence MORE WRITING and HOMEWORK!

….. at least until my roomie gets back 😉

Hope everyone had a fantastic Easter!!!

I know he did!