Qwhat? You don’t use q’s in certain qwords?

In other news, the east coast has been bombarded with snow. A lot of snow. 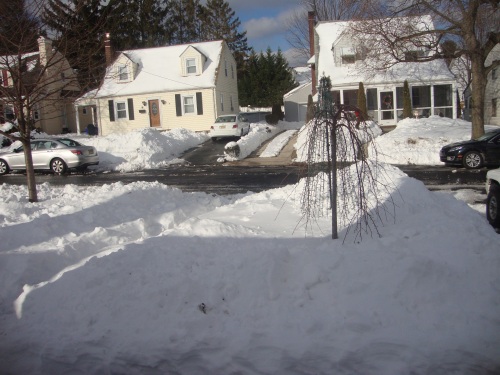 We know that I’m a winter child and will forever be one. However, this lovely white powder has put a major detriment on physical activity! Without running and a gym, I’ve been relying on the WiiFit, online yoga and nightly made-up workouts in my room.

It’s interesting how desperately you crave physical activity when you’re without it. 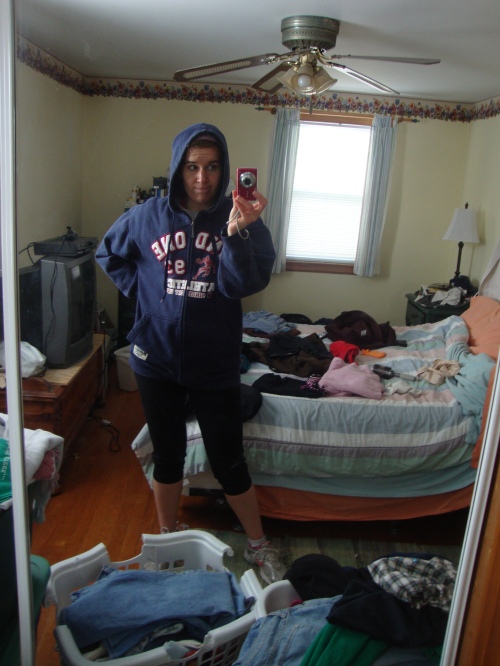 (Nana and Chubby have a particularly messy room. Tsk tsk!)

I bundled up today and took to our garage to use the stationary bike. It was COLD in there (I saw my breath all over the place!) but it was so totally worth it. I biked for an hour AND was able to work up a pretty decent sweat despite the temperature. Yay!

Backtrack to yesterday’s eats… it was a boring, boring, BORING kind of day. Pretty sure I read blogs for at least 2 hours straight. Heh.

OIAJ… it’s been a while! 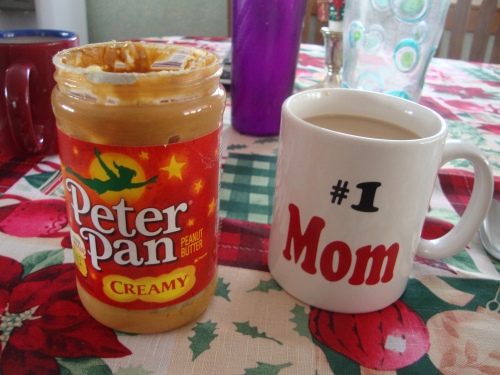 “Sometimes he makes me hold up his head for him” -Cate 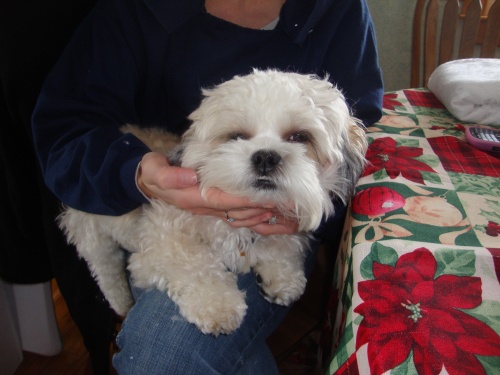 Doing nothing makes him tired sometimes.

I wasn’t really hungry for a while but eventually decided to eat a tangerine.

Expect MANY more of these. We received a huge box of citrus fruit for Christmas so I’ll be taking in a considerable amount of vitamin C!

I forgot how difficult it is to peel cold fruit. 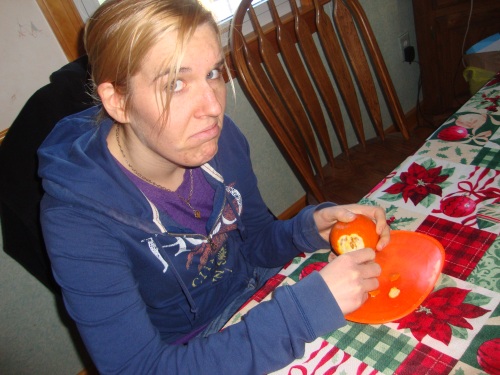 Hamburger covered in hummus atop a HUGE pile of romaine lettuce/carrots. I also made sweet potato fries for everyone and had some on the side.

Although it did feature more wine 😉

The rest of the night included my first time watching CBS Monday night TV which turned out to be truly hilarious!

This was particularly good for the cold

Now I’m reading more blogs (or “makin’ the rounds’ as I like to call it!), downloading music for my mom and contemplating another cup of coffee and some yogurt. Hmm.

I leave y’all with a lovely Ask Amy letter that was in today’s paper. It was just one of those things that just reminds me that there’s nothing wrong with being single (yours truly has been single for, well, ever) and that everything will fall into place when it’s ready to.

Why yes, OIAJ, that would be me! Two days ago I finally received the awaited package in the mail and gave the battery a full day to charge, just to make sure.

Being able to take a picture of my lunch was like being born all over again.

…well, maybe not THAT great but still pretty good… 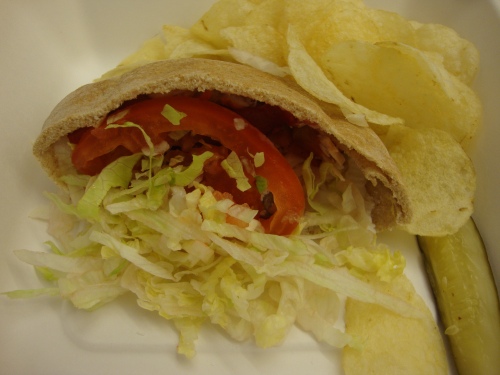 Ever since I gained the knowledge about goat cheese at Cranberrys, I’ve grown into a routine with getting the best sandwich ever. Same exact thing except I get whole wheat pita instead. Goat cheese, where have you been all my life?!?!

Back tracking a bit, last night A313 was surprised with a certain gluten-free lovely girl and freshly baked cookies!

Oh my bisky, I haven’t had a cookie this good since I’ve been home. Pumpkin cookies with cream cheese frosting.

They were like little pumpkin clouds of pure love. Thank you for sharing them Amelia! They were perfect 😀

Before I depart (another short post… boo!), I figured I would just throw it out there that on Saturday I will be running the Turkey Trot for the second year in a row! It was my first real 5K and absolutely incredible. Cannot even begin to say how psyched I am to go at it again. YAY!

Happy Friday my blog lovelies! It’s an absolutely BEAUTIFUL day outside and I’ve got to make this post fairly quick. I’m heading back to North Jersey today with Mandy and Kat and we’re going to NEW YORK CITY COMIC CON TOMORROW!!!

One Comic Con wasn’t enough. It’s too addictive. That’s going to be a fun post to, er, post!

Breakfasts as of yesterday and today!

(Ignore the strawberry stews…and the random blob of Nutella.)

I’ve realized that as time goes on my desire to make my food pretty is getting stronger. It would appear that strawberries and bananas look absolutely lovely together!

Well, OK, not everything can be super pretty. Like when it comes to OIAJ, the tastiness is the first priority!

Another jar bites the dust! This time it was the Blue Diamond AB with honeyyyy. A fine jar he was! Into the jar went:

I FINALLY got to crack open some of my Nutty Guys products! 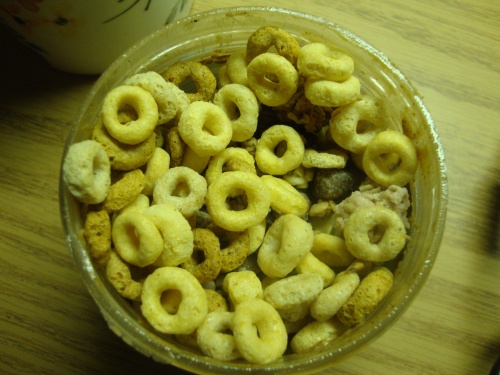 Dear Cheerios… GET OUT OF THE WAY.

Oh look at the poor darlings trying to escape. 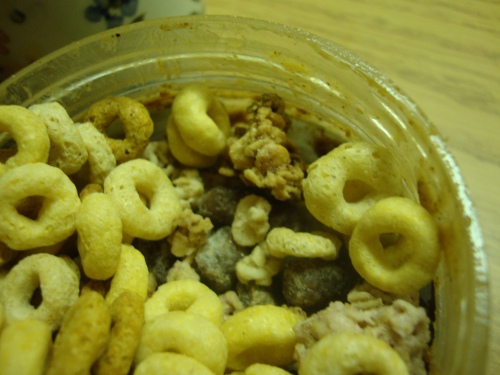 Even if you can’t see them just believe my words… SO AMAZING.

I think I have fallen in love with the granola. It’s out of this world. I love things that are cherry flavored and with this granola you don’t get the taste immediately but after chewing it for a few seconds it’s like WHOA. I would definitely buy this again from them, coupon or not!

Today’s lunch was typical. Delicious with lots and Dalys fun. 😀

AND, in the spirit of Tina, I celebrated cookie friday!

Chocolate rocky road cookie from Dalys was calling my name. Normally I can ignore the desserts but to this guy I couldn’t say no. I’m glad I did. Cookies are one of the best things to ever exist. Yay cookie friday!

And that’s all I’ve got. I’m running a little behind now and have to pack all my gear!

I won’t be posting until Sunday so until then! Have a fabulous weekend everyone! ❤

The Biggest Loser is on and I’m so happy to actually be able to watch it! My night class was canceled today and instead we had an afternoon trip to the poo plant.

No, I kid you not. Field trip to a sewage plant. It happened. There was waste water, stinky smells and crazy little flies.

And despite the unpleasantness of the place, I was hungry.

Breakfast before the poo adventure 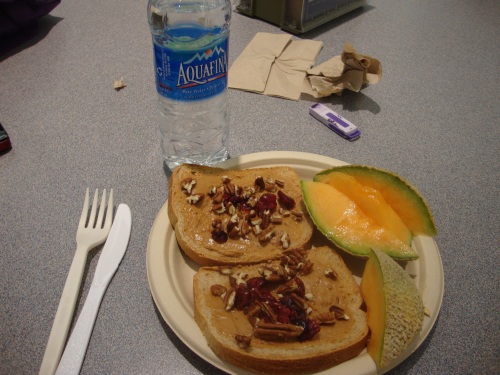 Whole wheat bread with PB, pecans and cranberries with cantaloop on the side. Notice the plastic silverware and paper plate? Yeah, Rider is having water issues AKA all our water is basically contaminated… I had to boil water to brush my teeth today.

Undocumented picture of food after poo plant. Guess I was just THAT hungry? It was a salad with a piece of grilled chicken and some kind of Chinese veggie thing. There was baby corn in it so that was cool.

Speaking of waste water (?) I had pond scum yesterday according to Mandy 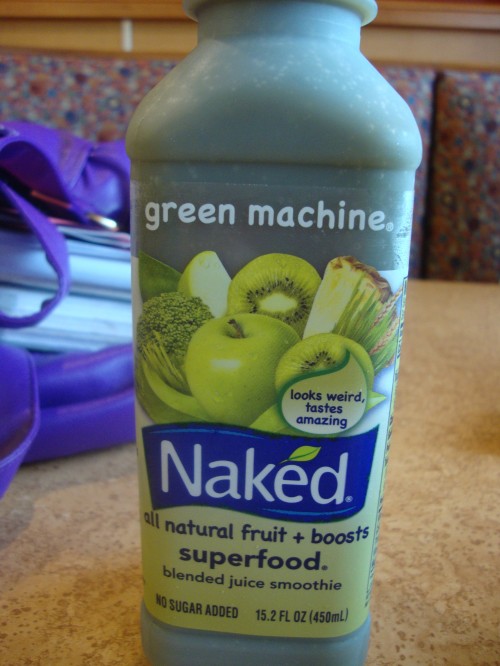 I definitely have a crush on this particular kind of Naked Juice. It’s the only flavor I ever get…I think it has something to do with my ridiculous love for spinach. Or maybe it’s just a general love for labels that tell me fun things.

You got that right Naked juice! I love you and pond scum appearance ❤

Other random eats of my days.

At least my OIAJ was a phenominal goodbye. It consisted of:

I think it may be one of my top 5 favorite nut butters. Not sure, I should make a list sometime. Not right now though, maybe tomorrow. Oh, VCPB… until we meet again!

There was ASPARAGUS at Dalys today. I love asparagus, in case you didn’t know.

I was seriously contemplating getting a plate of asparagus but thought that would be a little weird.

And I saved the best thing for last….

PUMPKIN PIE SOFT SERVE. Best thing Dalys has ever had ever. I need to control myself with it. Don’t want to have too much of a good thing! It’s going to be difficult though; it’s like a soft serve pumpkingasm. Legit.

Oh, and I did a presentation in my Hip Hop class today about Salt-N-Pepa. 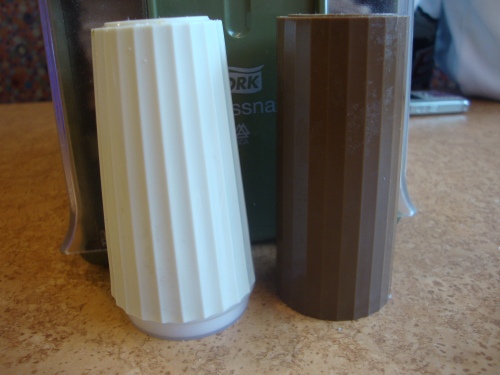 And that’s all I’ve got for y’all. I’m vague, I like drinking pond scum and I don’t like poo plants. Yay!